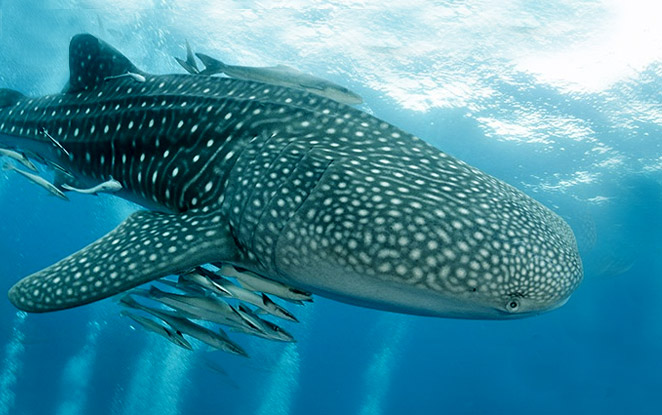 You’ll never really know how big whale sharks really are until you’re in water next to one of them. Having a close encounter with a whale shark is a memorable experience. This species of fish can grow up to a length of 18 meters. When fully grown, they’re quite massive and can weigh thousands of kilos. However, don’t let these facts scare you.

They’re absolutely friendly and this is why many divers and snorkelers long to swim and dive with them. Whale sharks are among the mysterious creatures of the ocean and are always on the move. For this reason, very little is known about their lives and breeding habits. Here are some of the best places where you can enjoy close encounters with them:

This Central American country is among the best places to witness these spotty fish. You’ll get the opportunity to have close encounters with them during the period between April and June. This is the time when a mass gathering of Mutton and Cubera snapper happens on the Southern Barrier Reef. It happens in accordance with the spring lunar cycle.

They can be found in abundance over a few days before and after the full moon. The best spots to see them is Silk Cayes Marine Reserve and Gladden Spit. You’ll have to follow the stringent rules while accessing them. These rules are for the protection of the whale sharks as a part of the local conservation efforts.

A UNESCO World Heritage Site, Ningaloo Reef in Western Australia is yet another beautiful place for spotting whale sharks. Hundreds of whale sharks appear during the coral spawning in the months of March and April every year.

They gather in this particular spot to feed on the abundant supply of krill and plankton. You’ll get to swim with them as a part of a tour. These tours are offered by many of the local tour operators. The best part is that 97% of the tours result in an encounter with the whale sharks.

There are a couple of whale shark havens in this North American country. Among them is Socorro, which is easily accessible from the Americas. It gives you the chance to get close to the spotty beauties from July to October. Along with them, you can also witness the Cali sea lions, dolphins, and big mantas.

Yet another reliable place to spot the whale sharks is in the waters off the Yucatan Peninsula. You can get there with a boat ride from the mainland between Isla Mujeres and Isla Holbox. August and September would be the ideal months to watch them in action.

Whale sharks were discovered in this part of the world in 1998 at a place called Donsol. This town has become one of the country’s major tourist destinations ever since. You can witness the spotty fish during the peak season, which runs from February to April. This is the time when they come close to the bay in search of plankton.

Encounters with them would be made possible with the help of snorkeling. Scuba divers can get to sites like Ticao Island and Manta Bowl as well. Another exciting spot to dive with them would be Honday Bay. It is located on the eastern shore of the Palawan Island.