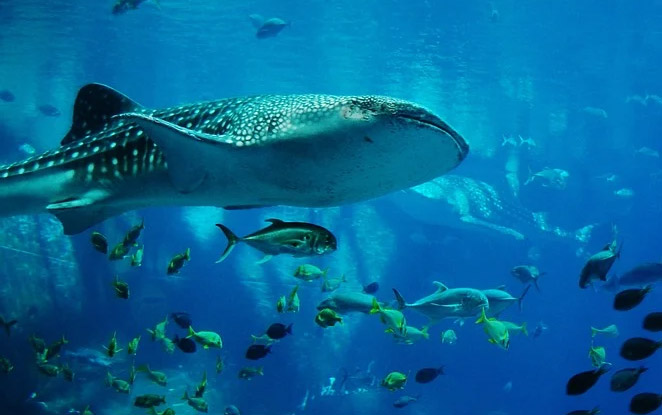 Whale sharks are not the fiery predators looking to hunt anything that comes their way. They won’t even mind you enjoying your swim around them. A wide flat head, spotted body, and large mouth are some of the prominent features of these whales.

Diets of these spotty fish comprise plankton, small fish, and a few other small creatures. They can grow up to 14 meters in length and can weigh about 10,000 kilograms. As whale sharks feed mainly on plankton, they regulate the excess growth of these organisms in the ocean. Since they are filter feeders, they also play an important role in maintaining the clarity of ocean waters.

Every year, the whale sharks visit the Ningaloo Reef located near Exmouth from March to September. The Ningaloo Whale Shark Festival gives you the opportunity to get close to these spotty fish. This coral reef system is among the only places in the world visited by these sharks in large numbers.

Besides watching the whale sharks in action, the week-long festival also involves various activities. They include live entertainment, movie night, and family-friendly adventures. The main purpose of this festival is to bring together communities, industries, and government departments.

By bringing them together, the festival aims to spread awareness about the whale sharks. You can plan an extended holiday in Exmouth to participate in this festival, which is held in May. During your time spent in this part of Australia, you can also go on eco-tours.

During the month of July, this festival dedicated to the whale shark is celebrated in Isla Mujeres. The whale sharks arrive in this region during the period between May and September. The waters surrounding Isla Mujeres provide ideal conditions for these sharks around this time of the year.

One of the objectives of this whale shark festival is to celebrate the beauty and culture of Isla Mujeres. It also highlights the importance of environmental care and the island’s natural splendor. During this festival you’ll get to know more about the nature of whale sharks and their importance. You’ll also get the chance to swim with these spotty fish upon booking a tour.

Before you embark on such tours, make sure you follow the instructions of your guide. It is also essential that you respect these marine beings and their habitat. Besides diving with these sharks, you’ll have the opportunity to taste the local food and enjoy the traditional dances.

The Maldives Whale Shark Festival is an annual celebration of marine life of the island nation. It is celebrated every year in August and brings together the local communities and government authorities. The aim of this festival is to promote environmental awareness and conservation of various species, especially the whale sharks.