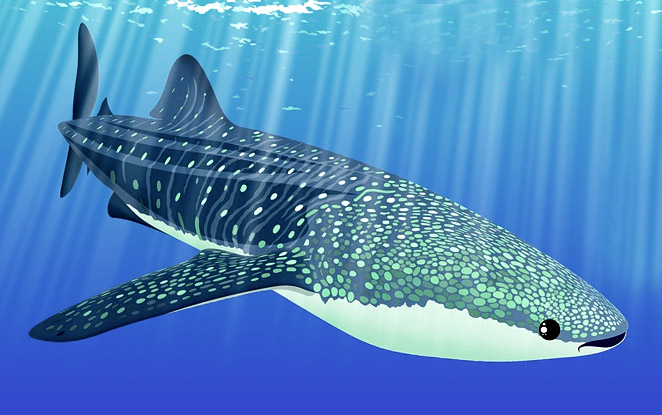 The largest fish in the world, whale sharks have a lot in common with the whales. However, they fall under the category of sharks. They are massive and do not feed like a typical shark. Whale sharks can grow up to 12 meters in length and weigh a little more than 20 tonnes.

Their size can be compared to that of a school bus. Usually the great white sharks get a lot of attention, but they are relatively smaller than whale sharks. The heads of whale sharks are flattened and they have a blunt snout above their mouths. Protruding from their nostrils are short barbels, the sensory organs similar to whiskers of catfish.

The color of the backs and sides of whale sharks range from gray to brown. They also have pale stripes and white spots. Each of them has its own pattern like the fingerprints of human beings. A whale shark’s mouth measures about 5 feet in width with rows of more than 300 teeth.

Whale sharks tend to share feeding grounds with others of their species. Despite this behavior, they are solitary creatures. A popular spot for juvenile whale sharks to eat and hang out together is the Red Sea. Besides these facts, not much is known about this species and their social habits. They haven’t been studied in detail as the other creatures of the sea.

Unlike most of their relatives, whale sharks don’t tear apart their prey. While they certainly love meat, they are filter feeders. This sub-group feed by straining food particles and suspended matter from water. Such species are considered extremely good for the ecosystems owing to their role in the clarification of water. Whale sharks allow water to get inside them by opening their mouths and then their bodies filter out food.

The water and debris are then released back into the ocean by their bodies. A major food source of this species are the plankton. Besides these organisms, they also eat algae, fish eggs, shrimp, and a certain species of fish.

Female whale sharks produce about 300 eggs and the young hatch inside their mother rather than water. Many never reach their maturity. Whale sharks enjoy a long childhood and are ready to have their own young when they reach the age of 25. This species may live up to about 150 years.

The population whale sharks in the Indo-Pacific is believed to have been reduced by 63% over the past 75 years. Their population in the Atlantic Ocean is thought to have reduced by more than 30%. Owing to their reducing population, they have been classified as endangered today.

The Philippines had banned the fishing, selling, importing, and exporting of this species for commercial purposes in 1998. It was followed by India in 2001 and Taiwan in 2007.