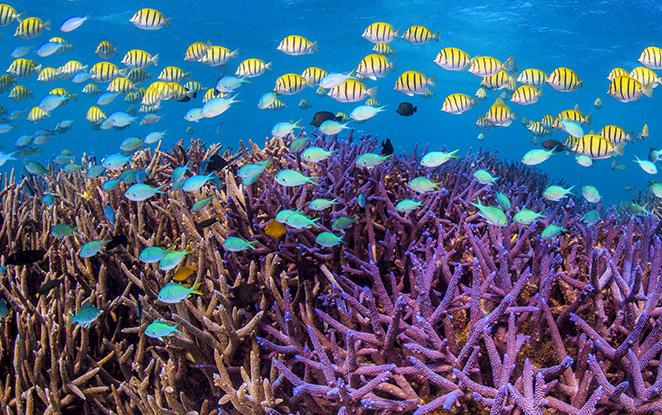 The name of this coral reef is derived from the Aboriginal Wajarri language word ‘ningaloo’. It translates in English as ‘deepwater’ or ‘high land jutting into the sea’ or ‘promontory’. The Yamatji people belonging to the Yinigudura and Baiyungu clans have lived in this area for over 30,000 years.

The reef is famous for its whale sharks, which feed during the period from March to June. The Ningaloo Reef is also rich in coral and other forms of marine life. During winters, the reef becomes a part of the migratory routes for manta rays, dolphins, humpback whales, and dugongs. The reef’s beaches are used by the green, hawksbill, and loggerhead turtles for breeding.

These turtles depend on the reef for food and nesting. About 500 species of fish, 300 species of corals, and 600 species of molluscs are supported by Ningaloo. It also supports many other marine invertebrates. The Australian Institute of Marine Science’s researchers discovered gardens of sponges in the marine park’s deeper waters in 2006.

They are believed to be species that are completely new to science. In December 2015, the short-nosed sea snake was found on Ningaloo Reef. It was believed to have been extinct for 17 years.

A marine park of similar name lies directly to the east. It is managed by Western Australia’s Department of Parks and Wildlife. Ningaloo Marine Park has an abundance of manta rays within the outer reef areas and lagoons. It has foraging areas for the whale sharks and is used by the humpback whale for migration.

Ningaloo Marine Park also protects the shelf and slope habitats. There are two protection zones within this marine park. Each of these zones comes under the IUCN category and has its rules for managing various activities. This ensures protection of marine species and habitats in the region.

Located near the Ningaloo Reef is this marvellous national park of Western Australia. It is located in the Gascoyne region and occupies the North West Cape peninsula’s western portion. Within the park is a spectacular gorge called Yardie Creek, which comprises water trapped by a sandbar. There are more than 700 caves in this park. It is believed that many others are yet to be discovered.

Also found within the park are more than 630 species of wildflower that bloom towards the end of winter. They include the desert sturt pea and the bird flower. Species of flora in Cape Range National Park include eucalyptus, minilya lily, acacia, and spinifex. Red kangaroos, rock wallabies, emus and a variety of bird and reptile species constitute the fauna of this park.