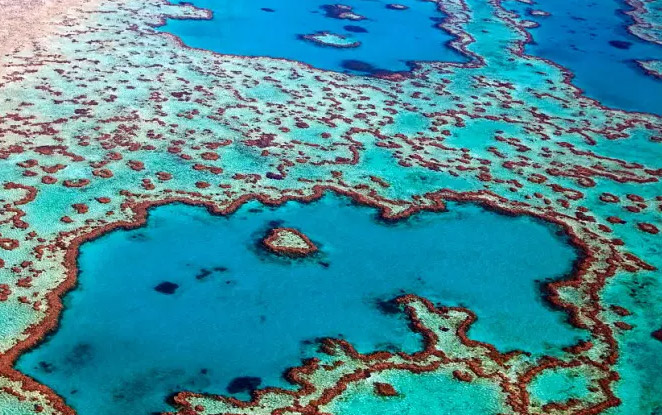 Coral reefs are colonies formed by coral polyps. These underwater ecosystems are held together by calcium carbonate. Most of them are found in waters that are clear, warm, shallow, and have access to sunlight. They are among the most diverse ecosystems on Earth and are sometimes referred to as ‘rainforests of the sea’. Coral reefs occupy less than 0.1% of the overall ocean area of the world.

This is the most renowned natural asset of Australia. Spread over 2,300 kilometers, this is the world’s largest coral reef system. It is home to over 1,600 fish species, 411 hard coral species, and 150 soft coral species. It is also home to six of the seven species of marine turtles in the world.

These coral reefs can be explored through snorkeling, scuba diving, or glass-bottom boat tours. During these tours, the tourists would also come across manta rays, whales, and sharks. Helicopter tours are also an excellent way of witnessing the coral reefs from above.

Ningaloo Reef is a part of the Ningaloo Marine Park, which has been declared a UNESCO World Heritage Site. It is located about 1,250 kilometers north of Perth and can be accessed from Exmouth. The coral system of Ningaloo Reef spans 260 kilometers. It is thronged by turtles, manta rays, tropical fish, humpback whales and whale sharks.

The whale shark season in this region begins in the month of April and continues until July every year. It presents the best conditions for tourists to enjoy close encounters with this amazing species of fish. The authorities have also taken some strict measures for protecting the endangered species.

Lady Elliot island would be the best place to embark on a diving expedition. It gives tourists the chance to dive with giant manta rays. After a busy day, they can head to the Great Keppel Island to enjoy some relaxed moments.

Located off the Kimberley Coast is this spectacular coral reef system. It covers almost 300 square kilometers and emerges from the sea during low tide. The best way to view Montgomery Reef is to take a boat tour. Tourists would get the opportunity to witness a variety of marine life, which includes turtles, saltwater crocodiles, and humpback whales.

Every year, the humpback whales migrate to their breeding grounds on the Kimberley Coast. This happens during the period between June and November. Broome is the place that provides access to the Montgomery Reef with the help of cruises.